Meet some of our amazing Instructors & Staff! Sensei Janice has been studying martial arts for many years, She is a 4th degree Black belt in Cervizzi SDS, and holds a Black belt is Jujutsu. She is the Director of Cervizzi's Martial Arts and also teaches classes and private lessons. She has completed six Boston Marathons, five Goofy Challenges and two Dopey Challenges at Disney, and loves spending time with her two daughters. She is also a Graduate of Bridgewater State with a B.S. in Management Science and Public Relations.
"You may not realize it when it happens, but a kick in the teeth may be the best thing in the world for you." - Walt Disney Sensei Diana has been studying the martial arts for more than 20 years. She currently holds the rank of 5th degree Black belt in Cervizzi's Self Defense and 2nd Degree Black Belt in Japanese Jujutsu. She is the Chief Instructor of the Lynnfield Dojo and is very invested in her students’ martial arts training. Among teaching classes and private lessons, she also enjoys doing our theme nights and vacation weeks. "I find watching the students gain confidence, learn life skills, and transform into the best version of themselves they can be to be the most rewarding part of my job." If you are looking for Diana on Sundays, you can usually find her at Bingo! Sensei Luke has 16 years of martial arts experience, is a 5th degree black belt in Cervizzi Self Defense System, and a 2nd degree Black Belt in Japanese Jujutsu/Judo. Sensei Luke is the Chief instructor of Cervizzi’s Martial Arts Academy in North Andover. He started his martial arts training in 2003 at the Lynnfield dojo and earned his black belt in 2007. He has been an instructor at the Lynnfield and North Reading dojos, and he helped open the North Andover dojo in 2012. He has designed, organized, and conducted approximately 100 extensive community programs in the area schools. Sensei Luke graduated from Merrimack College in 2007 with a B.S. in Business Management. Shihan Kris has been studying martial arts for more than 30 years and has been teaching for more than 20 years. She is the Chief Instructor in the North Reading Dojo and currently holds the rank of 6th degree black belt in Cervizzi's Self Defense and 2nd Degree Black Belt in Japanese Jujutsu. She teaches most of the classes and private lessons in the North Reading dojo. Shihan Kris enjoys the outdoors, camping, and going to concerts! 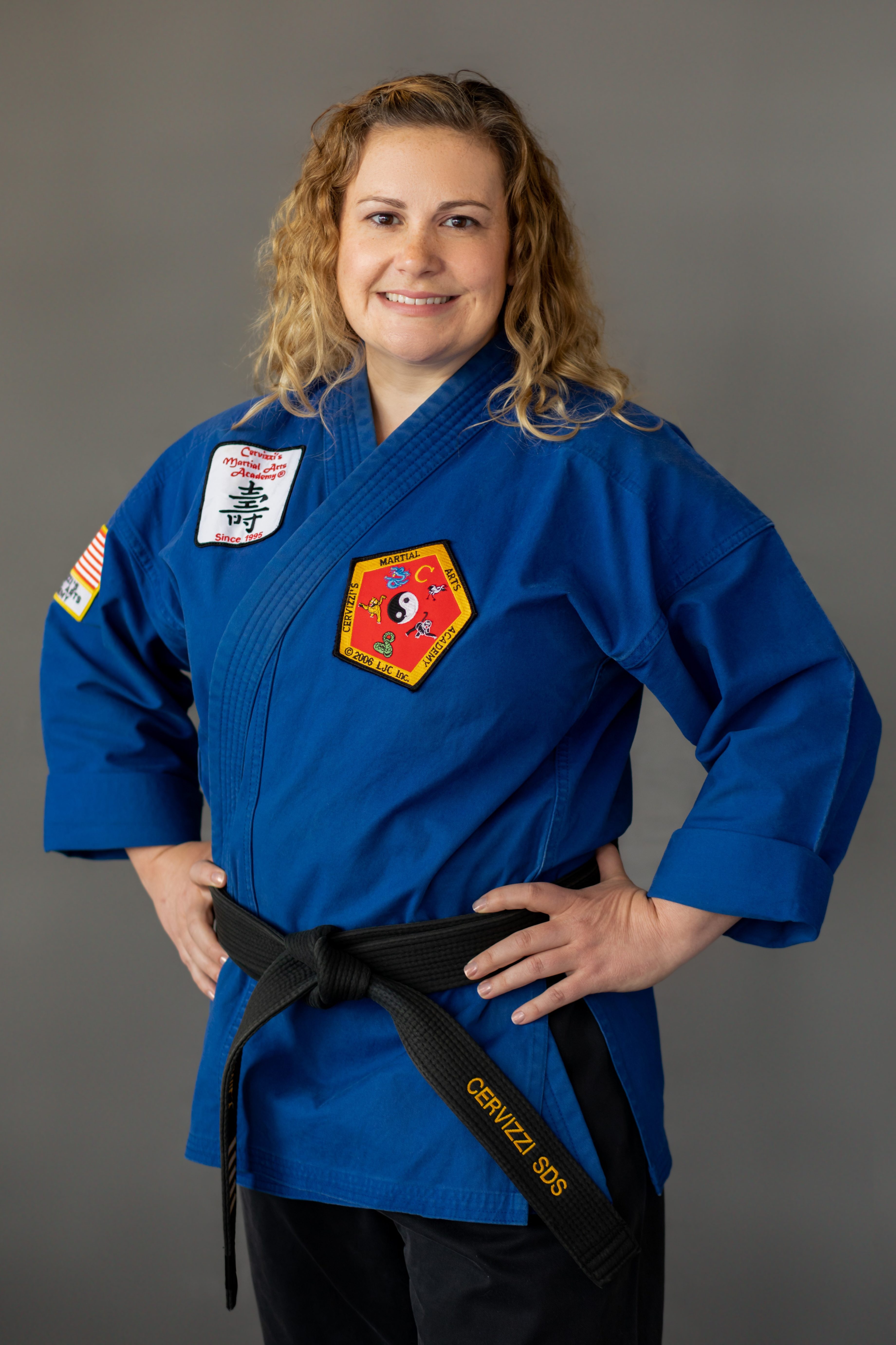 Sensei Emily began studying martial arts at the age of 14 and is currently a 4th degree black belt in Cervizzi SDS. She teaches group and private lessons at the Lynnfield location. Emily holds a Masters of Arts in Moderate Special Education from Lesley University and a Bachelor of Arts with a Concentration in Elementary Education from Endicott College. She is currently a Special Education teacher in the Saugus Public Schools. Sensei Jake has been studying with CMAA since the age of five. He is one of the favorites in the North Reading dojo. He is a 2nd degree Black belt and his work ethic and commitment is truly remarkable, and he works hard every day. Jake specializes in grappling and has a great personality. You can see Jake at a Comic Con event too! Andrew has been studying Martial Arts with Cervizzi's for six years and earned his 1st degree Black belt in April of 2018. He expects the best from the students at all times, Aside from karate, Andrew is a an active member of the N. Andover community member of the NAHS Race Amity club, Anime and psychology club. He is also president of the gaming club! He is an integral part of the North Andover dojo. Tracey has been with teamCMAA for over 16 years, she began as involved parent of Sensei nathaniel. YOu can find Tracey at our Lynnfield Dojo Lisa recently joined our team in the North Andover Location. She enjoys spending time with her 2 daughters and loves to workout!
She is happy to answer questions and welcome you to the dojo! At the age of 12, Chris began studying the Martial Arts with Master Paul Cervizzi when the school opened its doors in 1995. Chris was among the first of the six black belts Master Cervizzi promoted in November 1999, and he is currently a 6th Dan in the Cervizzi’s Self Defense System. Throughout his martial arts career, Chris has been dedicated to learning and teaching the martial way while developing and creating new programs at CMAA to help others reach their goals and dreams. His martial arts education has helped him focus and attain his B.SAt. degree and a Masters degree in Architecture at Northeastern University. Chris, along with his amazing wife Stefanie and three vibrant kids Christopher, Max, and Sophie, has been a longtime resident of Winthrop, and the entire family enjoys traveling, being outside, and having fun. Seth Winch began his martial arts study as an adult, wishing to make a change in his life. His journey to Shodan rank helped him reach many personal goals. He is currently a 3rd degree black belt. He now smiles a lot and can be heard with a loud ‘kiah’ or booming laugh – teaching or ‘playing’ karate! He holds a 1st degree black belt in the Jujutsu program and continues to seek higher ranks and a deeper understanding of the martial arts way and life skills.